Deglobalisation – Which Way Will the Tide Turn?

On June 23, 2016, the Britons bowled a googley, stumped, shocked most of financial analysts, markets and voted themselves out of the European Union after 43 years of membership. It was a day that stumped millions and changed the landscape of the European Union forever. The initial reactions lead to mayhem in the markets and the Pound took one of its worse beating ever in history. A close call with the vote divided 52/48, it is a vote against immigration, lack of permanent jobs, slow or no growth in incomes, rising realty prices and pressures on public services. This vote is a clear reflection of an increasingly inward focus of the developed economies; one that is pivoted on issues of the common man.

Brexit is a reaction to the new normal of a long period of slow growth and widening inequality. It is also a sign of the emerging reality that the established assumptions of party ideologies are beginning to be overridden. Anand Mahindra succinctly put forth the rationale of why a large number of analysts, business and political leaders have been skeptics when he said “The European experiment was akin to rolling a boulder uphill in the absence of complete political and fiscal union.” 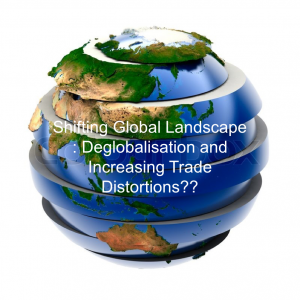 A similar environment is developing in the USA. Donald Trump blames free-trade for America’s loss of manufacturing and its balance of trade deficits, which is contrarian to the Republican Party’s long standing view. He built his popularity by highlighting similar issues of the common man, as did the Brexit campaigners. Incredulously the Republican US Presidential front runner, has progressed on the back of this rhetoric, and might soon make it to the White House too. Trump, while reacting to the Brexit result said “a great thing has happened. It is an amazing vote, very historic.” He once again highlighted people’s anger against immigration with “People are angry all over the world, they’re angry over borders, they’re angry over people coming into the country and taking over and nobody even knows who they are.”

The rhetoric that is building up against Free Trade, Immigration and Foreign Direct Investments though unprecedented is not limited to the US alone. This phenomenon is a reality of our times. Political parties and candidates are winning elections by building to a crescendo the discussions on issues that impact the lives of the common man. They create a fear of losing jobs to the immigrants; fear of security of their families and loved ones and finally a negative vote for the political leaders who have brought this fate upon their country.

Alongside the xenophobia and ultra nationalistic feelings being built, is the fact that Foreign Trade is a complex subject; often the common man finds it difficult to fully comprehend its outcomes. It is easy to influence the minds of the people who might be inclined to take an emotional rather than an informed decision. There have been news reports about Britons googling “What is EU” after the Brexit verdict; many have accepted they had no idea what leaving the EU might really mean for them; yet others are saying if they had a chance to vote again they would vote to stay. Which is why perhaps there are signature campaigns being launched for another referendum?

Michael Falcon, CEO Global Investment Management Asia Pacific, J.P.Morgan aptly summarizes this occurrence when he says “I think we are going to see as we move into this week and even weeks beyond, more volatility, as the speculation ebbs and flows, as the path becomes clear or at times perhaps less certain. Whether that’s rumours spreading or failed attempts to change or moderate course. People’s emotions can rise or fall.”

The reactions of the common man notwithstanding, the global economic landscape are being redrawn with Political Leaders, Economists and Experts holding contrary views. The US President Barack Obama had earlier warned of a negative impact of Brexit. This reaction was perhaps based on their own interests in the TTIP and TPP, the two biggest trade agreements being currently negotiated with substantial US interests. Post the vote though, he has emphasized that US shares a special relationship with the UK which will not be impacted by Brexit. This, analysts, says could have been prompted by their fears of a possible reduction in Britain’s contribution to the NATO, were they to become a weaker nation.

Given such a shifting global landscape, in my last essay I had raised some related questions such as: in the increasingly de-globalizing scenario, what are the top worries of the developing and emerging nations? In the emerging global realities should WTO not be pushing the development agenda that it was originally set up for?  In this essay I share my perspective on some of the biggest challenges facing our world today.

For the first time, global geopolitics has over shadowed the economic and fiscal risks. The global level playing field has begun to blur, increasing trade distortions are emerging and countries are tipping towards closed borders. Given that global trade holds the key to poverty reduction, de-globalization is the biggest risk facing the world today. With many more Western European nations turning their backs on the world, it is the top most worry for many emerging and developing nations.

The fact, that for the third year in a row, global trade growth rates are trailing, has only provided fuel for the rhetoric. The monetary and fiscal policies announced by most countries in response to the global financial crisis have, if anything, made them autarkic and inward focused. Even India, one of the few economies experiencing growth, has begun to question the efficacy of its FTAs with various countries and is building up a case to renegotiate some of these.

Over these years there has been an enhanced occurrence of Regional Trade Agreements (RTAs) and a renewed reliance on economic sanctions as a foreign policy device. All of WTO’s current 162 members are involved in at least one of the 265 RTAs already in force. According to a recent G20 report, the resort to trade distortions worldwide today stands at two-and-a-half times greater than at the same point in 2009. In 2015 alone, governments worldwide imposed over 500 trade distortions, of which the G20 countries alone accounted for close to 450.

The World Trade Organization (WTO) has become an increasingly stalled functionary since the global slowdown in 2008. Ministerial after ministerial have seen negotiation stalemates. Established to liberalize and supervise global trade, today, in its 20th year, the WTO faces the possibility of becoming superfluous. The reason- a clash of ideologies of the developing and emerging nations on the one hand and the developed world on the other. The WTO has generally failed to deliver on its initial commitments leading to a trust deficit amongst the former group of nations. They are thus pushing for a continuation of WTO 1.0.

The developed nations reached where they stand today by exploring trade possibilities beyond their borders. It was global integration and international trade that drove the growth of the US, Western Europe and Japan, the most developed regions of the world. This same developed region, today holds a vision of WTO 2.0 which stresses that WTO rules be updated to allow reciprocal market access. Incorporation of new issues, such as competition and investment, into the WTO rules is being vociferously advocated by these nations.

In addition to the Free Trade worries is the US Federal Bank slowly moving towards, what it terms as gradual normalization of its interest rates. Last year this had led to a financial market chaos and a flight of capital from the emerging world.  While Central Banks of some of the other key economies did not follow suit, nevertheless, the disruptions that one Fed move could bring on to other economies is well known. The long term prognosis for the world economies is not very encouraging. Japan continues to face manufacturing contraction; the US Fed Open Markets Committee has projected a lower growth of 2.2% this year; European Economies are in a state of flux with the withdrawal of Britain.

A stalled WTO, a downgraded growth forecast, a shift in the balance of power and the ensuing pressure to re-established their supremacy have prompted the developed world countries to go beyond pushing for regional trade agreements. In this scenario does the WTO have the wherewithal to rise up to the occasion; Can it play a constructive role which is aligned to the new global realities, while still keeping at its center the interests of the developing nations? Can it help turn the tide from de-globalization back to globalization?

In an increasingly complex international trade scenario with fragile economies pushing their own interests, a frosty environment is building up. I believe that political leaders will have to find solutions to the issue of sluggish global growth, not by closing their borders and imposing sanctions, but by keeping in mind the interests of all nations. The growing barriers being erected will have to come down sooner than later. The WTO certainly has a role to play in working towards creating a level playing field.

Will this emerging global reality lead to a more polarized Asia, with Asian countries trading amongst themselves? What impact will the increasing de-globalization have on the Indian economy? Will there be a flight of capital along with decline in global trade? Which way the will tide finally turn remains to be seen. I would take this discussion forward from an India perspective in my next essay. I will also build a discussion around the issues from the B-20 Business Meeting perspective which I will join in September 2016. I invite the readers to share their views on the increasing de-globalization and tightening of borders.