Industry and Biodiversity – Are they really at Cross Purposes?

In my last essay  I shared some thoughts on the alarming rate at which the Earth’s biodiversity is declining and the need for its conservation in a crisis mode.  It cannot be denied that economic growth and a depleting biodiversity have an inversely proportional relationship. Over centuries as economies have grown, the earth’s biodiversity has slowly slipped from beneath our feet. This challenge is further amplified by the continued struggle of Developed and Emerging Economies alike to find growth in economic activity ever since the global meltdown.

Today we are living in a globally connected world, a world that is constantly in a state of flux with disruptive changes redefining global trade and services. Economies such as India are experiencing a major shift towards urbanization and also facing challenges of food security, access to electricity and better infrastructure. Given the aspirations of people, India’s Government is focused on job creation, which requires increased industrialization. Increasing industrialization and urbanization has, over centuries, proven to be counterproductive to biodiversity. We hear of increasing cases of wildlife straying into towns; most recently a tiger died after being hit by a truck. 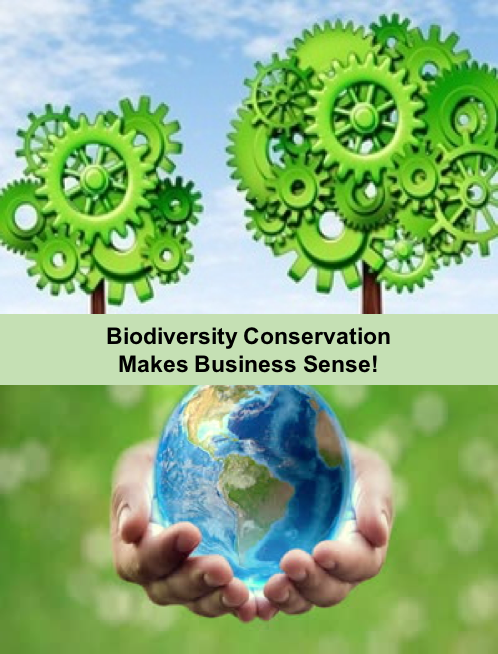 The challenge of building biodiversity is not trivial. Governments, businesses, and citizens all have a key role to play. As businesses continue to be driven by profits, many a times biodiversity conservation would remain a short-term goal, unless legislated. Few countries have been able to kick start this process through regulations requiring business to reduce their environmental footprint. In Nordic countries carefully targeted government measures have led to environmental improvements along with economic growth. Between 1990 and 2011 the Nordic region’s carbon dioxide emissions from domestic sources declined by 9% while total GDP rose by 55%. Having followed the carrots and sticks approach, these countries have used revenue from Environmental Taxes to promote responsible environmental behavior through initiatives such as subsidizing public transport system. In both Finland and Denmark, economic incentives such as feed-in tariffs have encouraged renewable energy producers to invest in bioenergy generation capacity or wind power.

While Governments work on policy frameworks, the big challenge in integrating biodiversity conservation and business goals agenda is the gap in the pursuits of the Business Manager and the Conservationists. Also, most businesses are constrained by their awareness of how the companies’ operations affect and are affected by biodiversity and ecosystem services as well as the need to respect ecological limits (Millennium Ecosystem Assessment 2005).

The impact of industrial activity on the BES constitutes a cost which does not get directly reflect in the bottom-line of corporates.  Alarming revelations have emerged from the work of Pavan Sukhdev in “The Economics of Ecosystems and Biodiversity” Report. It has revealed that Corporate profits could be reduced, on an average, by one-third over the next 40 years as a result of the continued loss of ecosystem services. Business-case thinking tells us to focus on reputation and long-term survival in addition to basic cost-benefit analyses of specific actions.

It is becoming increasingly clear that a focus on the bottom line alone can be disastrous. In pursuit of our commercial goals if we continue to destroy our biodiversity, pollute the air, release greenhouse gases into the environment, we are irreversibly destroying our resource upon which our future generations will depend.  More than its negative impact on corporate results, it is Biodiversity value that needs consideration.

The struggle is thus between the bottom line of the next quarter and what’s going to happen four decades later. It is increasingly expected that businesses need to generate a net positive effect on biodiversity by minimizing the negative impacts of their activities and by making additional contributions to conservation priorities.

The good news through all this is that with a little ingenuity, economic growth and biodiversity conservation can get aligned to a common goal – profits that ensure sustainability of the biodiversity. Businesses and biodiversity are interlinked through ecosystem services that are vital for economic activity. According to some estimates almost 40% of the world’s economy is based on biological products or processes. Integrating biodiversity in business decisions would help improve the bottom line bringing in benefits of greater resilience, security of supply and ultimately a sustainable business model. Several cost-effective operational measures with both a financial pay-back and a positive result for biodiversity are possible to implement. Reducing energy, water and paper use, and recycling waste products are examples which lead to financial saving as well as conservation benefits.

An IUCN study released in 2008 lays down a business case for considering biodiversity conservation as a profit center. The Clean Ganga and Yamuna Missions of the Government of India are the prime example of such business opportunity. This Mission will not only lead to the revival of the two rivers but also the flora and fauna and thus the ecosystem services dependent on these two. In the process these two projects are expected to offer business opportunities of up to Rs 30,000 crores.

Businesses and governments are beginning to realise that they have a positive role to play in solving the pressing issue of biodiversity depletion. While companies are making commitments on reducing their ecological footprints, Governments are raising the bar on their targets. Investors are considering biodiversity offsets as new business opportunities as well as an indicator of good corporate governance. A whole new world, resting on pillars of sustainability and profitability is emerging around biodiversity conservation.  A paradigm shift in the belief that economic growth and BES conservation are at cross purposes will accelerate this positive evolution.

In my next essay I will thus take this discussion further to issues such as Are there actions that the industry can take to arrest the decline and make a positive impact on both industry as well as BES? Are there innovative ways to incentivize those who contribute to biodiversity conservation?