Jugaad – A point of View

About the Author: “Mr K. C. Verma is a close friend, author of  “Stories I wouldn’t tell my mother” and ex-chief of R&AW.

It is said that “Best is the Enemy of Good”.  But the converse is also true: Good is the Enemy of Best. We could even enunciate that ‘good enough’ is the enemy of good! Because once we get accustomed to the comfort of good enough, we stop striving for even the good – forget about the best. 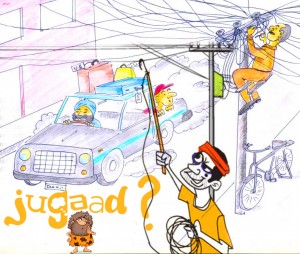 This is most starkly demonstrated in our peculiar attitude towards ‘jugaad’ – we don’t just accept it; we eulogize it. In a country riding high on slogans and acronyms, we seem to have conferred a special meaning to jugaad – Something pompous like “Judicious Utilization of Gadgets with Altered and Affordable Designs”.  Appropriate axioms might not have been coined yet but we have come to believe that “Good is the Substitute for the Best”. We seem to have further accepted that ‘Chalta Hai’ is the substitute for Good. Thus half-baked ideas and imperfect technology is branded as genius.

At one end of the spectrum, jugaad has given the ‘Maruta’ and the ‘Jugaad’ – dangerous platforms moving on our highways, powered by water pumps. At the other extreme, jugaad has become an all pervasive philosophy of patchwork solutions. In fact jugaad manifests itself in so many ways that we are inured to it. Sometimes we even fail to recognize something as jugaad! How many times have we seen an out of order lift with a semi-permanent sign that says proudly “Out Of Order”? Haven’t we all seen loose wires hanging where these should have been underground? Cables strung on branches of trees? Cardboard on broken window? Duct tape holding bumpers of cars? A myriad applications involving bits and pieces of string and wire and adhesive tape and epoxy resin and other quick fixes. Jugaad is an ubiquitous phenomenon –  to bridge resource gaps and arrive at ‘make-do’ solutions, usually to cut costs.

We seem to have developed a mindset that the street smart Indian is capable of anything and his jugaad of ‘Chalta Hai’ solutions is the epitome of creativity and innovation. We don’t hear words such as ‘perfection’ or ‘standards’ or even the more commonplace ‘efficiency’. We applaud any innovation as long as it reduces the cost. ASA, DIN, ISO and ISI be damned!

A good example of regressive engineering is my father’s petromax lamp, manufactured by the Primus Company of Sweden. My father bought the pressurized kerosene lamp in the mid-1940s. This lamp has a single-piece glass chimney, a gauge to indicate pressure, a small cup and spirit dispenser to initiate the lighting process, an inbuilt pin to prime the flow of kerosene and a beautiful blue enamel cover. It also has an insulated handle and a bypass blower which can be used to get the mantle to burn evenly.

In my lifetime, I have seen what jugaad has done to the design of this lamp. The single piece chimney broke too easily, so as a first step it was replaced by a cheaper chimney made of strips of glass held in position by some tinfoil and wire. In the next step, the chimney was done away with altogether. The cover was the next to go because it had a largely ornamental role. It probably protected careless people from getting burnt but removing it and putting it back on was such a pain! The gauge for showing pressure was a costly item and it was removed without any apology. The user would know when the pressure was too low because the mantle would glow less. The spirit cup got left out somewhere too. And the blower was no longer needed because without the chimney, the user could always blow directly at the mantle to make it glow evenly. The handle was removed because without the cover no one would lift the lamp because his hand would get burnt!

The jugaad story would have ended there. But along came the small jugaad gas cylinder. And now we have the bare bones jugaad petromax lamp – a gas burning mantle at the end of a curved pipe leading from the home made gas cylinder! You can see it at every wayside market – the ultimate technological revolution!

It is time we started seeing jugaad in the proper perspective. Innovation should be a process for refining technology and processes. Not an excuse for making do with a shoddy product when a better one is available. Or to simplify design or abandon safety features in order to reduce costs. Why should we expect – and accept – a good enough solution instead of the best?

Jugaad may be a necessity under some circumstances. Let us be prepared to reluctantly condone it. But for God’s sake, let us not be proud of it! Let us not make a virtue of it!