Letter from a small town in America

Earlier this month, on the Second of December, Syed Rizwin Farook and his wife, Tashfeen Malik, killed fourteen people in San Bernardino, before themselves being shot in a gun battle with the police. The incident has severely shaken the people of the United States of America; shaken them in a way that the Paris attacks of a few days earlier had not.

Of course the Islamic State of Iraq and the Levant (ISIL or the ISIS) is being held responsible. Emphasis is placed on the fact that Tashfeen Malik was a recent arrival from Pakistan. While the sentiment is partly that the terrorist couple was not ‘people like us’, there is also an undercurrent of apprehension that any neighbour could well be the perpetrator of the next terrorist outrage.

Yes; San Bernardino has shaken the Americans. While it may not be correct to say that a climate of fear prevails, the people are definitely spooked. 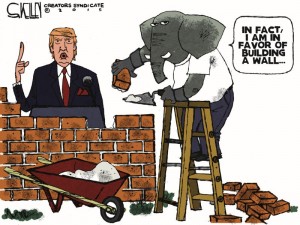 This worry   is reflected in many ways. There is the usual debate on how much, or little, control there should be on guns. Much is being made of the alleged failure of the immigration authorities to discover the social media posts of Tashfeen Malik. There is renewed vigour in the debate about the extent to which privacy concerns should circumscribe security checks.  Schools are promptly closed if there is any hint of a threat. And security concerns have suddenly become an important subject for public debate.

President Obama received a briefing from his entire security staff in the Pentagon on December 14. In the brief statement he issued thereafter, he warned the ISIL of hitting harder than ever. He enumerated ISIL losses and declared that some prominent figures had been eliminated.

In essence, however, he said nothing new and indirectly reiterated that there is still no strategy for meeting the threat from the ISIL. The announcement that the US Secretary of Defence shall visit the Middle East to press US allies to increase their commitment to the fight against the ISIL was an implicit admission that, so far, there is no effective coalition of the willing.

Through his statement on the 14th, Obama was obviously seeking to blunt criticism and seeking more to reassure his countrymen than outline any grand strategy. He must have been hoping that the people would not listen to the words being said but only hear how they were being said.

The USA is entering an election year with serious economic and foreign policy issues facing the nation. The San Bernardino incident has, however, quite effectively diverted the narrative to concerns about national security and terrorism. The Republican Presidential Debate is centering on these two issues. And the debate is more or less reduced to “Who is tougher against terror?”

In a pre-election scenario that appears weird even by American standards, Donald Trump has made statements against Muslims which might have been considered unimaginable even six months ago. The intemperate views have been condemned in several quarters, but his constituency seems to be lapping it up.  His xenophobic rants have found surprisingly widespread resonance and many believe Trump has brightened his chances to get the Republican nomination through fear- mongering. Trumps fortune may or may not be ultimately decided by engendering a sense of insecurity, but the rhetoric is bound to have a lasting impact.

There is a general atmosphere of the people wanting their leaders to “do something”. But besides jingoistic declarations of taking “decisive action” there is little that can be done that might be dramatically different. Which may not be such a bad thing. The USA – and the world – can little afford knee jerk reactions due to domestic compulsions or election gimmickry.