World Bank Rankings – Do They Tell The Whole Story!

Earlier this month World Bank released its Doing Business Report (DBR) which ranks countries on Ease of Doing Business. India was placed at 130 out of 180 countries – a dismal improvement of a single rank from last year. The Indian Government as well as several stakeholders have since expressed much disappointment on this ranking. And rightly so!

With the reforms and initiatives launched by the Government over the last two and half years, India has made much progress. We have moved up the ladder on at least two global indices –16 places on the World Economic Forum’s Competitiveness Index and 15 on the World Intellectual Property Organization’s Innovation Index. India regained its 2nd position on Grant Thornton’s Business Optimism Index, released on November 6. During this period, the country also attracted the highest amount of foreign direct investment in the world. Such phenomenal improvement on various matrices indicates significant reforms and high levels of investor confidence.

The questions that need answering then are : Why is India moving up so slowly on the EDB rankings? Has India really not made significant progress?  or Does the World Bank methodology not reflect actual progress made?

As highlighted by Junaid Ahmad, World Bank’s Country Director for India, one size does not fit big and diverse countries. India is a vast country, with 31 States and Union Territories. But for India, the World Bank studies progress made by only two cities – Delhi and Mumbai. Mapping a limited 41 indicators, it ignores crucial parameters such as the economic strength of the country, taxation reforms, subsidies, levels of corruption etc. Over the last two years, various Indian States have made substantial progress on these and many other parameters.  Delhi and Mumbai are therefore not a true reflection of the progress made by the country. 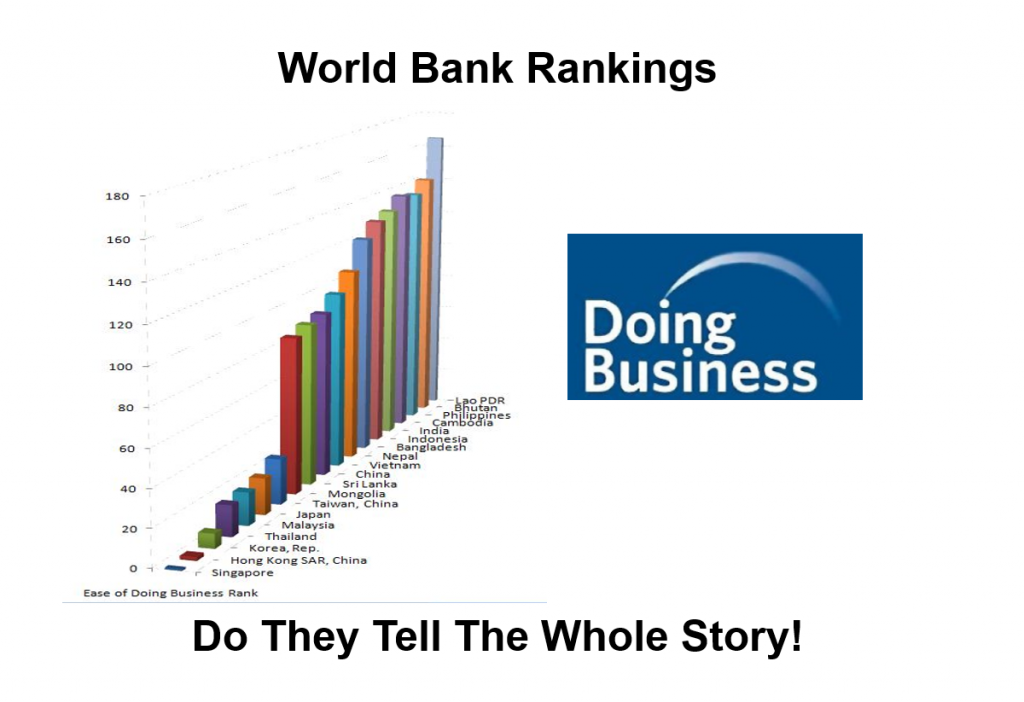 I believe that World Bank’s DBR released in 2014 that ranked India at 142, served as a wake up call for India. Our visionary Prime Minister, Sh Narendra Modi, set a target of positioning India amongst the top 50 countries on the World Bank Index. To help realize the Prime Minister’s vision Confederation of Indian Industry (CII) partnered with Department of Industrial Policy and Promotion (DIPP) to draft a milestone oriented Reforms Action Plan. These efforts culminated in the Business Reforms Action Plan (BRAP) driven jointly by DIPP and World Bank. With a target in place, India set out on a much larger mission of launching reforms at the States’ level.  Starting with 145 parameters on which the States would be assessed for reforms. The list was later expanded to 200 and then to 340 in 2015, with an aim to go as granular as possible.

While engaging with DIPP on behalf of CII, I had the privilege of observing the seriousness with which Mr Amitabh Kant, then Secretary, DIPP and his successor Mr Ramesh Abhishek, worked to translate the Prime Minister’s vision into reality. On various occasions, I have also had the privilege of interacting with other bureaucrats and observing Ministers of a few States, especially Haryana. I am heartened that our States are leaving no stone unturned to build a positive ecosystem for Doing Business in the country.

The Government’s Assessment of State Implementation of Business Reforms 2015-16 under BRAP, released last week, is a clear reflection of the State’s commitment to undertake reforms. Facilitated by DIPP, the World Bank validated that an aggregate of 6,069 reforms had been implemented by the States between July 2015 and June 2016. Sixteen states implemented reforms on more than 75% of the 340 parameters. This year’s toppers, Andhra Pradesh and Telengana, scored a high 98.68% on implementation and Gujarat stood a close third. Haryana, Uttarakhand and Punjab, last year’s laggards, also made substantial progress. Delhi as per this Assessment requires acceleration and Maharashtra was ranked number 10.

While India still has to resolve issues related to land record digitization and early resolution of court disputes, the reforms ball has been set rolling at both the State and Central level. A healthy competitive federalism is visibly taking root amongst the States, urging them to reform and woo investors. Going forward, implementation of the Goods and Services Tax, a major tax reform, will surely improve India’s business environment.

What remains to be seen is that with all the Government’s efforts how soon will India find its place amongst the top 50 countries on the World Bank DBR? What are the actions that India still needs to take to improve the business environment further? What will it take to push the laggard states to buck up?