I very much share David Quinn’s sentiments. Driven by greed and recklessness, human beings have made intense demands on the Earth, destroying its surface vegetation, degrading its soil fertility and almost drying up the water resources. Over centuries, there have been accidental and often intentional removal or addition of certain predator, herbivore or plant species to ecosystems. Such actions have led to disproportionately large alterations of ecosystem services with high environmental, economic and cultural losses. 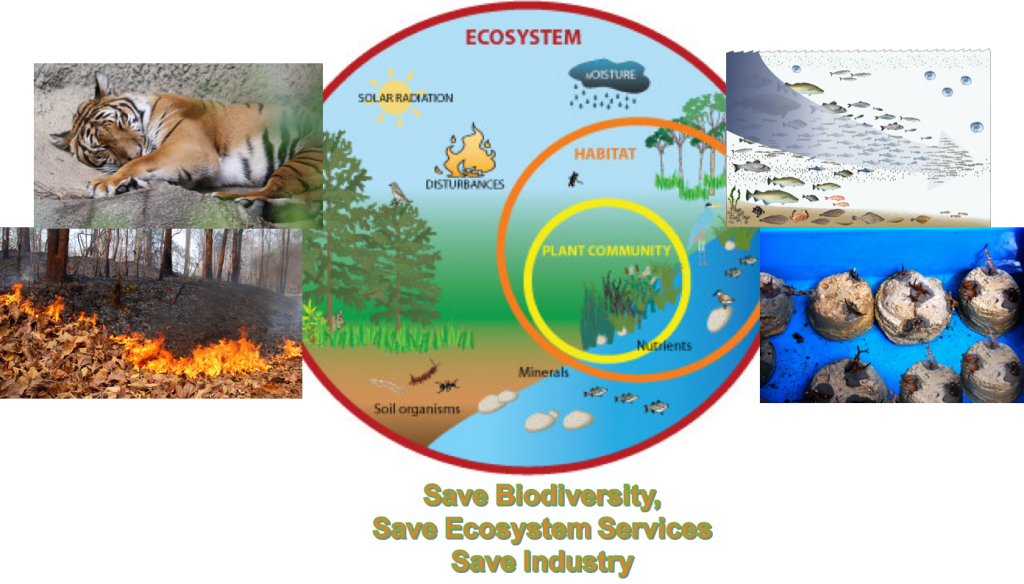 The Result – on a global basis, biodiversity and its ability to provide essential ecosystem services are being degraded at a rate which is unsustainable!

Today the impact of such damage has become intertwined in our daily lives. The recent devastating floods in Chennai are an aftermath of the depletion of Ecosystem Services. With receding forest covers there have been increasing instances of wildlife, specifically Tigers, straying into factories and some towns in India. The most unfortunate forest fires that have ravaged the forests of Uttarakhand and Himachal Pradesh over the last few weeks have destroyed their ecosystem services forever and will make a far reaching impact on the biodiversity. Last two years have seen Mount Everest struck by avalanches and an earthquake that shook the world. Fifty percent of the iconic Great Barrier Reef of Australia has already been lost and it continues to be impacted by acts of both humans and nature.

If we are to find solutions to the problems we are faced with today, we need to know what is happening to the biodiversity and ecosystem services.  This I see as a very big challenge because the very landscape of biodiversity and the criticality of its conservation are an enigma to even the most enlightened of minds. This is further combined with an absence of awareness amongst businesses as to how they impact biodiversity and how they can add value. An interesting aspect also is that businesses do not know that in the conservation processes also lie business opportunities for them.

Conserving biodiversity is critical not only in the fight against climate change but also in understanding how it affects goods and services provided. The Chennai floods for instance paralysed India’s Auto Supply Chain for weeks, having far reaching impact on the global industry. It is thus becoming increasingly necessary that we raise the awareness levels about biodiversity degradation and what can be done to arrest this depletion. Projects such as the Amazon Forests Project and the Tiger Project must gain heightened media attention.

Over the last few weeks, as I studied the subject just a little deeper I was surprised that even on Earth Day, the social media did nothing that transcends the basic issue of Global Warming. The focus has rather been on some of the causes and by-products of biodiversity decline i.e. climate change and greenhouse gas emissions, with little reference to biodiversity.  I did however find a Report that read “Global Warming might dominate the headlines today, but Ecosystem Degradation will do so in the future.”

Even though globally over 1.6 billion people depend on forests to meet their basic needs, there is little attention being paid to this phenomenon. Surprisingly the final text of the Paris Agreement does not go into specifics of what needs to be done to arrest the biodiversity depletion. It is a matter of relief though that the Rio Conventions Pavilion did document the importance of mainstreaming biodiversity issues highlighting the need for urgent action on conserving and restoring habitats and enhancing ecosystem services as a part of sustainable development.

Biodiversity provides numerous ecosystem or environmental services absolutely crucial for making human life possible. Humans derive most of their essential food and fibers from animals and plants. Biodiversity can affect the provision of ecosystem services through its influence on ecosystem processes essential to Earth’s life support systems. Pollination and seed dispersal of useful plants, regulation of climatic conditions suitable to humans, animals and plants, control of agricultural pests and diseases, and the regulation of human health are all influenced by ecosystem services. Biodiversity indirectly supports the production of food, fiber, water and shelter through its impact on nutrient and water cycling, soil formation and fertility.

Over the decades, economic growth has only accelerated biodiversity depletion.   Economic and social development generally involve more consumption and open markets, both highly correlated with business development but also often associated with biodiversity loss and if not well planned means an ecosystem services decline. A big challenge thus is to reinforce economic development strategies that are ecologically sustainable, socially equitable and good for business.

Although the needs and intentions of successful industry and those entrenched in poverty may be quite different, but the consequences for biodiversity will often be the same.  And while loss or disruption of these goods and services have significant costs for all sections of society, depletion of biodiversity and natural resources have a disproportionate impact on the welfare and livelihoods of the rural poor in Emerging Markets, who are often particularly reliant on the natural world.

Given that India is a key player in the Emerging Markets, it is our duty to guide our growth process as responsible global citizens. Through a series of Blogs, I thus hope to start a conversation around some important questions such as – Are businesses doing enough to arrest biodiversity depletion? Does a focus on Biodiversity mean compromising with corporate profits? How can they add value to themselves while arresting the alarming biodiversity depletion? Can we look for innovative ways to leverage biodiversity conservation to the benefit of businesses? Are their business opportunities in the process of biodiversity conservation?