The US Presidential Elections are turning well established thinking on its head. Donald J Trump has made no bones about the fact that the NAFTA agreement was a mistake saying that if he was President, “the North American Free Trade Agreement (NAFTA) will be renegotiated and probably terminated.” Making a negative narrative of free trade, Trump has gone on to say that the “TPP was designed for China to come in, as they always do, through the back door and totally take advantage of everyone. This is one of the worst trade deals. And I would, yes, rather not have it.”

A recent Pew Survey has revealed that only 44% of the Americans believe that the US engagement in Global economy is good for their country as it provides access to new markets and opportunities for growth. Trump has echoed this sentiment in his speeches, over and over again, with statements such as “We’re losing now over US$500 billion in terms of imbalance with China, US$75 billion a year imbalance with Japan.” 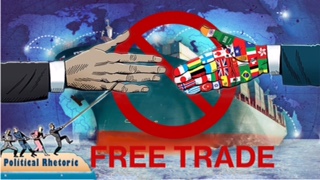 About 49% of the respondents of the Pew Survey have said that involvement in Global Trade adversely impacts the US citizens as it tends to lower wages and takes away their jobs. That’s why perhaps his rhetoric “Who the hell cares about free trade”, seems to have struck the right cord amongst the American voters.  Not surprisingly his focus on people’s pain points, be it job creation or their security and safety, has helped Trump become the Republican Presidential frontrunner.

The same Pew Survey also revealed that Trade is the last thing on the minds of the Americans. Respondents ranked trade at the rock bottom of a list of 18 probable priorities for the White House this year. While increasing globalization has helped pull millions of people out of poverty, in the eyes of the common American, it has meant job loss. This feeling has only been accentuated with each passing year since the Global meltdown that had its epicenter in the US and which the world is still recovering from.

Trump has thus done well in making illegal immigration, social security, Wall Street and currency manipulations the centerpiece of his campaign. This thinking is quite contrary to the long standing articles of faith of the Republican Party – unwavering support for free trade and the business community, a robust American presence in the world and a commitment to deep tax cuts. An increasing number of Republicans are today opposed to freer trade than there ever have been.

A powerful populist thrust that views the elites as caring only for themselves has gained further momentum with the Panama Papers. The large number of politicians named in these papers have furthered the beliefs that to avoid paying taxes elitists engage in financial mechanisms. These are often those that they have themselves imposed on the people of their country.

From the Presidents of Ukraine, Azerbaijan and Russia to the Political Stalwarts of countries such as Iceland, Egypt and Iraq have been named in these Papers. Twelve national leaders are among 143 politicians, their families and close associates from around the world known to have been using offshore tax havens. The investigations triggered high profile resignations, including that of the Icelandic Prime Minister. There are pressures on world leaders and politicians in various countries to explain their connections to offshore companies, a large percentage of which are based in China and Russia. There is now a sense of urgency amongst lawmakers to close the loopholes related to currency transactions

While Trump may have ruffled the long standing assumptions about the way a Republican Presidential Nominee campaigns, what is happening in the US is not unique. It is a reflection of a phenomenon that seems to be building up around the world. Across Europe parties that are taking extreme positions are winning elections. If it is the anti immigration party in Austria, it is Podemos in Spain. The common theme that seems to be building up globally is skepticism about globalization and an increasing focus on solutions to national problems.

Trump is not alone when he plays on the populist paranoia with “Something is going on; and it’s bad!”  While Brexit continues to raise a raging debate, it also cannot be denied that since 2006 Mr David Cameron has come to power more than once on the back of a Poll guarantee that he would hold a referendum on the EU’s Lisbon Treaty. In 2013, he promised an In/Out referendum, which perhaps was the reason for the Conservatives to secure absolute majority. Today when David Cameron has voiced concerns of an “Out” result, the referendum is still going ahead.

Brexit supporters are very clear that it would rid Britain of job killing regulations and they would be free to decide on their trading partners. The leftwing in Britain, while making its case for Brexit, has built upon a campaign similar to that of Trump. “The EU is not – and cannot become – a democracy. Instead, it provides the most hospitable ecosystem in the developed world for rentier monopoly corporations, tax-dodging elites and organized crime,” they say.

Brazil is facing a deep rooted political crisis, while it is in the throes of a fierce recession. The opposition to Rousseff resembles in some ways the populist themes of the Trump and Sanders campaigns in the U.S. Reckless spending by the Brazilian Government in the last couple of years led to a retrenchment in spending programmes and a perilous financial situation.  What seem to be emerging today are policies dictated more by domestic political realities than by the pressure of foreign governments. These are far reaching changes with the well established Marxist and neo Marxist trends seemingly on their way out. Argentina also saw an astounding upset by conservative and pro-market candidate Mauricio Macri over Peronist candidate Daniel Scioli in November, 2015.

What is happening today is an outcome of the failure on the part of the Developed Nations to recover from the global recession of 2008. Poor employment numbers are giving rise to fresh concerns about yet another global recession which is likely to fuel the anti-globalization backlash well beyond the Trump campaign, the Brexit referendum and elections in other European countries. Very recently Jeffrey Immelt, Chief Executive, General Electric aptly summarized the increasing Global penchant for populism when he said “Protectionism is rising. Globalization is being attacked as never before.”

With WTO becoming almost a non-entity, mega trade pacts not making much headway and an increasing number of nations trying to safeguard their own interests, every country seems to be wanting to close its borders. And, we seem to be at an inflection point which is accelerating in the direction of de-globalization.

In the emerging global realities should WTO not be pushing the development agenda that it was originally set up for? In the increasingly de-gloabalising scenario, what are top worries of the developing and emerging nations? How are these emerging Free Trade realities likely to India’s growth strategies? I will build a discussion around some of these questions in the next few essays. I invite readers to share their perspectives and points of views on the thoughts I have shared in this essay.