When you hear the word “leadership,” what does it mean to you?  Have you determined how to be the leader who stands out? The leader who makes rock steady relationships? Our styles are as diverse as they are unique.

As the following story and examples illustrate great leaders use all of their capabilities to lead. They leverage capabilities that are externally focused and also those that serve as internal fuel; like the balance illustrated by the symbol of yin and yang, great leaders work to stay balanced, every day.

Our premise is true leader’s need a balance of inner strength, and also demonstrated competencies to lead.   Living every day as a leader isn’t a cakewalk. It takes perspective, perseverance, grit and alignment between your head and heart to be successful.

These are the 12 capabilities of leadership.  Six capabilities relate to your external presence, including:  Likeability, Credibility, Confidence, Communication, Social Intelligence and Brand/Image. In other words, how we “show up” in our daily interactions. These are strengths that signal to others we are worth listening to, credible in judgment, and are to be respected for our opinion and candor. When we apply these capabilities, we read people, interact with ease and put others at ease. Credible and confident leaders know what to do and have the social intelligence to know what not to do. 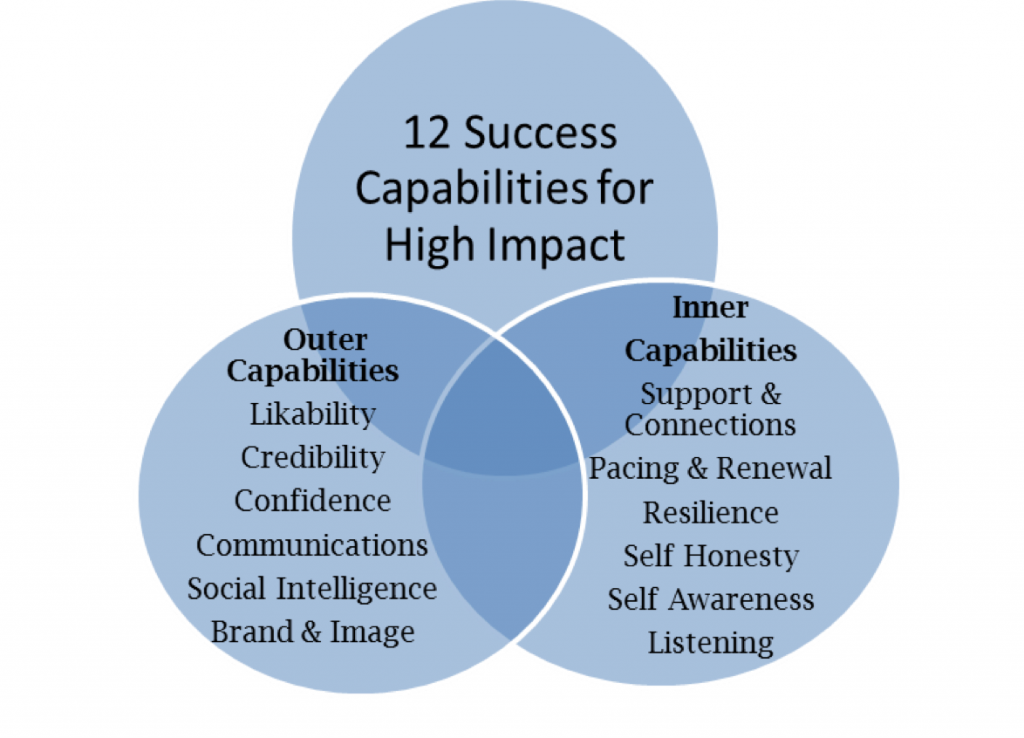 The six other capabilities relate to a leader’s internal being including:  Self-Awareness, Self-Honesty, Support and Connections, Pacing/Renewal and Resilience.  These characteristics allow leaders to maintain balance, support, friendship and emotional agility necessary to stay whole and healthy.

Your life’s story will determine your leadership style. Everything you have done or thought is added to the caldron of your presence. And it changes every day. When you learn something new, it goes into the pot. Triumphs, betrayals, songs, books, people you’ve met, failures, accomplishments, hateful thoughts, marriages, plays, negative feelings, loud noises, traffic jams, new friends and even your fourth grade teacher are all in the caldron, blending.

Jon is an example of a leader who stays in balance, using all of his abilities. He uses his credibility, likability and confidence to know what to do. He uses his self-awareness and resilience along with social intelligence to know what not to do. Jon was the CFO of a large, diversified chemical company. He was amiable and got along with everyone. This was a good thing since his peers were known to include some intellectually challenging and egotistical types. In meetings where confrontation was the norm, Jon was the one to crack a joke, without sarcasm, which broke the tension and enabled everyone to stay on point and solve a problem.

Jon progressed in his career faster than others because he was competent, got along with the Chairman, could manage his function, produce results with superior analysis, and was a genuinely friendly and honest person. In contrast, some of his peers also got ahead but made enemies who couldn’t wait to see them fail. When they made mistakes it became a blood fest, raucous with accusations like: “I told you he was incompetent and here’s another mistake I can point to.”

On the other hand, if Jon needed help he had eager teammates quickly willing to work with him. And Jon was quick to help others and give credit for his peers and direct reports’ accomplishments to the Chairman. Eventually Jon became Chairman and changed the company culture to a values-oriented, person-centered company. Employees became more engaged, they delivered superior service and products to customers, and the stock price rose. Jon’s style was emulated and the culture became more open and innovative, and was named a “best place to work.”

What happened to the egotistical peers? Some left, some were fired, and Jon developed the strengths of those remaining to be more aligned with the new culture.

Earlier we mentioned leader’s using 12 important capabilities. Half of those are easily seen, and form a leader’s brand. In Jon’s case he built a solid reputation in a toxic environment and was highly respected to become then next Chairman. He also used his internal strengths to have the capability to last through the tough times and be a constructive leader instead of a destructive pseudo-leader.

Whether you follow sports figures, government leaders, thought leaders or business leaders, the same themes are heard: “A great person attracts great people and knows how to hold them together as a tribe.” They are unforgettable and have sayings and qualities that stick with us. Not every leader is famous but leaders are visible in all walks of life.

People have asked us in groups, in workshops, and one-on-one to define leadership. The Globe Project, a group of scientists from 62 countries, defined leadership as “the ability of an individual to influence, motivate and enable others to contribute toward the effectiveness and success of the organizations of which they are members. Those qualities come from using both our outer and inner leadership abilities.

Without credible, balanced and trustworthy leaders there is chaos. Organizations, countries, counties, municipalities, trade associations, sports associations, and even neighborhood associations can’t succeed without leaders. That’s why we pay attention to what leaders are doing. Great leaders make a difference in our lives.